Keystone Church: How We Got Our Name

How did we get the Keystone Church Name?

When we were formally planted as Keystone Church by Cornerstone Church we knew we needed a new name as we established a local church here in Ankeny. One of those steps in establishing a church was choosing a name.

As you look throughout the Scriptures, when God does something new, he often gives it a new name. As the elders in Ames and Ankeny considered this transition, they came to the conclusion that we needed a new name.

How do you name a new church? We asked the same thing.

We went through a process and want to let you know how we arrived at the name Keystone.

Cornerstone Church of Ames is our parent church. We love where we came from – the values, the heritage and encouragement.

Our name overlaps their name. We wanted to say we are like you in our values, but we are also something new.

There is also theological meaning. Throughout the Bible, a stone or a rock is symbolic of the strength of God.

…lead me to the rock that is higher than I.
For you have been my refuge, a strong tower

In the New Testament, Christ is often referred to as the rock or stone. Jesus is the foundation on which the church is built.

In the Gospel of Matthew chapter 16, Jesus asks His disciples who they thought he was.

13 When Jesus came to the region of Caesarea Philippi, he asked his disciples, “Who do people say the Son of Man is?”

14 They replied, “Some say John the Baptist; others say Elijah; and still others, Jeremiah or one of the prophets.”

16 Simon Peter answered, “You are the Messiah, the Son of the living God.”

17 Jesus replied, “Blessed are you, Simon son of Jonah, for this was not revealed to you by flesh and blood, but by my Father in heaven.

18 And I tell you that you are Peter, and on this rock I will build my church, and the gates of Hades will not overcome it.

We also wanted a name that was simple to say and easy to remember. We also knew we needed a website and social media that was easy to find.

Our Lead Pastor, Brent Minter, was looking into what is a keystone? A keystone sits at the very top of a Roman arch. What’s interesting is, if you remove it, the arch falls. That’s exactly what we want to be to this community with the Gospel.

More About a Roman Keystone

A keystone (also known as capstone) is the wedge-shaped stone piece at the apex of a masonry arch, or the generally round one at the apex of a vault. In both cases it is the final piece placed during construction and locks all the stones into position, allowing the arch or vault to bear weight.[1][2][3] In both arches and vaults, keystones are often enlarged beyond the structural requirements, and often decorated in some way. Keystones are often placed in the centre of the flat top of openings such as doors and windows, essentially for decorative effect.

Although a masonry arch or vault cannot be self-supporting until the keystone is placed, the keystone experiences the least stress of any of the voussoirs, due to its position at the apex.[

An arch is a curved structure that is usually made of stone, brick, concrete, or, more recently, steel. Its purpose is to support or strengthen a building. Most arches consist of wedge-shaped blocks. The top center stone, called the keystone, is the last block to be inserted. During construction, arches are often supported by a wooden frame. When the frame is removed, both sides of the arch press against the keystone and thereby support the arch.

The Romans did not invent the arch. The ancient Egyptians, Babylonians, and Greeks all used it. The purpose of the arch in these cultures, however, was limited to supporting small structures, such as storerooms, and people often used columns to support the roof. This design limited the size and scope of a building. As a result, builders could not construct extremely large palaces or government buildings. The ancient Romans created an arch that could support huge amounts of weight.

How the Name Translates to our Calling as a Church

We believe that as good as Ankeny is as an incredible community, we know it needs the hope and good news of Jesus. We want to be the keystone in this community to help make a difference.

We knew we needed a memorable logo. Our logo is a Keystone with four edges as whitespace or negative space to symbolize the cross. 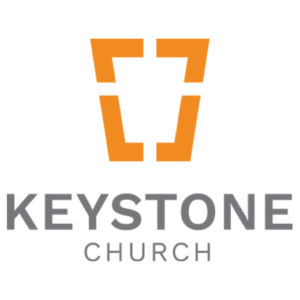 While we changed our name on April 23, 2017, we are keeping the same DNA, values and goals that we’ve always had as a church plant. We invite you to be our guest as we strive to be the church that God wants us to be in Ankeny.